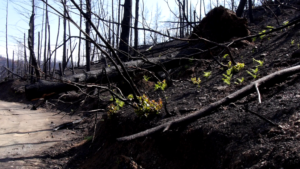 The destruction of North Euboea is being mourned in Greece and beyond. Its a total destruction, which even if it wasn’t predetermined, it was certainly allowed to happen.

We introduce this investigative site «The Plan» (gr: To Schedio) with a documentary, or to be more precise, a document, as on how and why Euboea’s natural wealth was lost, and why the recourses of people who chose to live in simplicity and in harmony with nature, were wiped out.

We decided to document the events by asking those who witnessed them, the actual people who fought fire and saved their villages and livelihoods.

We decided to present the true testimony of these people, so as memory is preserved before propaganda prevails.

With a camera literally on hand we travel to familiar places of our childhood, and witness how the memories of a lifetime were turned into mourning.

To our sorrow, we realize that some people have decided that this natural beauty, and the way of life that accompanied it, must not be revitalized.

Nonetheless, the locals of North Euboea have not spoken yet. They must have the final word.

We are here to document their voices, emotions, agony, experience and fears. We will not focus on an effort to produce an immaculate “artistic” documentary through specialized technicians, even though we do not underestimate such expertise. Rather, our focus is on rapidly chronicle the actual events, before people’s grievances are forgotten.

Greece’s Prime Minister’s claimed that the devastating fires were a result of climate crisis. However, there is strong evidence to indicate not only the hypocrisy of his claims (meaning that he deliberately used the issue of “climate crisis” as an excuse), but also the fact that his government is been largely engaged in policies that degrade the environment and destroy nature in order to serve political and economic interests. In that respect, the complete destruction of more than 500,000 acres of forest and cultivated land can be explained not only by the absence of authorities’ support during the fires, but also by the “day after” of the destruction. Measures taken and laws enacted on the aftermath of the fires offer a clear indication on who is responsible for them and, mainly, who is to benefit!

Your help is crucial in order to secure basic needs for this project i.e. traveling costs, gear, editing, translation and subtitling etc.) so that we can proceed quickly and effectively.

We hope and plan to have this documentary completed already by mid November 2021. This can only be made possible through your help, which will provide the “fuel” for such a precious production.

We do not wish nor seek to be burdened by a sole sponsor for obvious reasons. Hence, we call out to the portion of the general public who is potentially interested and supportive of our mission.

It is understood, that whoever contributes to this project will do so on a condition of trust towards the creators of this documentary and will not seek to interfere with their work. We have a record that proves the independence of our research and our commitment to the people that supported us in similar projects in the past. This record is our previous documentaries, both on issues related to politics and the environment.

We certainly hope that your contribution comes sooner rather than later, as we want to complete this documentary as soon as possible. This is a promise that we made to the people in Euboea. 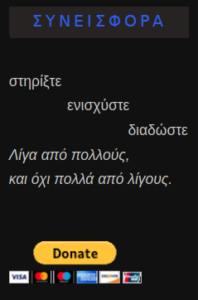 You can support in more ways should you wish to do so.

You can provide evidence, testimonies, information, you can share our material with friends, notify those around you, organize screenings, inform groups of people or organizations of our research. In this sense, you can function as a piece of information chain regarding the dangers that threaten North Euboea. Dangers that persist, even after the destructive wildfires of August 2021.

Once the documentary is complete, it will be freely distributed throughout the internet. As mentioned above, you are encouraged to watch it with friends and organize screenings and promote it in any way you deem possible.

It is imperative that this is done in a non-commercial manner, i.e. without ticket or intention for any sort of financial gain. The sole purpose of any such event must be to freely support the people in North Euboea.